Find the best deals on 4,795 hotels in Los Angeles, California

Find the perfect Los Angeles hotel for business or leisure

Things to do in Los Angeles

What is the average price of a hotel near STAPLES Center?

What is the average price of a hotel near Venice Beach?

If you’re planning on staying at any of momondo’s recommended hotels in the area of Los Angeles nearest to Venice Beach, you should expect to pay around $263/night. This price fluctuates based on time of year. In general, a rate under $263/night is a good deal for momondo users staying near Venice Beach. Hotels near Venice Beach are typically 9% more expensive than the average hotel in Los Angeles, which is $239.

What is the average price of a hotel near Los Angeles Convention Center?

Search for hotels in these Los Angeles neighbourhoods

Venice on the Beach Hotel

The Inn at Venice Beach

When to book a hotel in Los Angeles

Let us help you with the best tips about Los Angeles

March – May and September – November are the best times to visit LA, to avoid tourist crowds and enjoy the pleasant temperatures ranging from 15 – 20 degrees Celsius. In the peak season from June – August, you’ll be greeted by heavy smog, sweltering heat, skyrocketing hotel rates and several key festivals such as LA Pride, and LA Film Festival. If you don’t mind the occasional rainfall, and temperatures around 10 – 12 degrees Celsius, then visit in the winter months from December – February, to find attractive deals on airfares and hotels.

Getting around Los Angeles

LA’s sheer size would mean that driving is a great option to get around the city. Do keep in mind that you’ll need plenty of patience during the peak-hour road congestions, and a GPS system to help you to navigate the scores of criss-crossing highways. Maximise your travel budget by looking for some great deals on car rentals with momondo. If you wish to rely on public transport, use the Metro system’s trains or buses. 1-ride base fare starts at $1.75 USD. If you purchase a TAP card for $1.00 USD at any of the TAP vending machines, you can get a 1-Day Pass on the TAP card for $7.00 USD with unlimited use of all metro services. Taxis in LA are expensive but easily available with fares starting at approximately $3.00 USD. Ride-share companies such as Uber and Lyft also operate in the area.

How much does a hotel in Los Angeles cost per night?

Get the best value hotel in Los Angeles

Where to stay in Los Angeles

Endless sunny coasts, sandy surf beaches, Hollywood glitz and glamour, high-end shopping, and eclectic cuisine, are only a few of the things that make up the cosmopolitan city of Los Angeles (LA). LA boasts of over 100 ethnically diverse neighbourhoods which have become home to people from 140 different countries speaking close to 224 different languages. Choose from one of these neighbourhoods to stay, and tailor your visit based on your area of interest.

Downtown LA is a central hub for business and commerce, transport, government buildings and department stores. With several restaurants, nightlife venues, museums and the convention centre, this neighbourhood promises to be buzzing at all times. Enjoy a luxurious stay at The Ritz-Carlton Los Angeles set in the LA Live entertainment complex, offering chic rooms with views of the glittering cityscape. You can also look at the historic 1925-built, O Hotel for a stylish boutique-style stay on Flower Street, in the heart of downtown.

Like a glossy city within a city, Beverly Hills with its famed zip code 90210 is the ultimate neighbourhood to spot many a celebrity on sidewalks, in coffee shops and in restaurants. The famous Rodeo Drive shopping and dining as well as the stately mansions of popular film stars are the highlights of this posh neighbourhood. Enjoy the star-studded legacy, classic old Hollywood ambience, and luxuriously furnished rooms of The Beverly Hills Hotel on Sunset Boulevard. Be treated like royalty when you choose the grand and luxurious rooms and suites of the beautiful Hotel Bel Air which is set on a 12-acre lush oasis near Beverly Hills. You can also look at the modern and stylish rooms of the Mr. C hotel set in an elegant all-white high-rise building on Beverwil Drive, close to Rodeo Drive.

This is LA’s most popular neighbourhood, and home to famous sites, such as TCL Chinese Theatre, the Paramount Pictures Studio, and the iconic Hollywood Walk of Fame, among many others. The famous Hollywood Boulevard and Vine Street are lined with plenty of throbbing nightclubs, bars, restaurants and hotels. Across the street from the beautiful pagoda of the TCL Chinese Theatre, indulge in a luxurious stay at The Hollywood Roosevelt. Established in 1927, this hip, upscale hotel had the privilege of hosting the first Academy Awards ceremony, and now features chic rooms and suites named after famous Hollywood artists. A 5-minute walk from Hollywood Boulevard, you have the bright, spacious and contemporary rooms of the family-friendly Magic Castle Hotel on Franklin Avenue. The Magic Castle nightclub and performance venue of magic enthusiasts is right next door.

For surf-lovers, the sandy beaches of Santa Monica and Malibu present the perfect conditions and best waves. Venice Beach is a quirky area, known for its trendy eateries, buskers, vintage souvenir stalls and walls lined with colourful graffiti murals. In Santa Monica, stay at Shutters on the Beach hotel which blends modern comfort with the ambience of Southern California, and attracts several celebrity clients. Enjoy the friendly vibe and an eclectic, diverse atmosphere of Hotel Erwin which overlooks the colourful Venice Beach Boardwalk, just an 8-minute walk from the unique and trendy shops of Abbot Kinney Boulevard. A 5-minute walk from the Malibu Pier, you have the Malibu Beach Inn, illustrious seaside accommodation with well-appointed rooms that sit directly on the white-sand beach, offering breathtaking panoramic ocean views.

Home to the legendary clubs of Sunset Strip, fashion boutiques of Melrose Avenue, posh art galleries, and a proud LGBT community, West Hollywood is a hip and expensive neighbourhood. Stay at the Farmer’s Daughter Hotel, a kitschy, country-chic boutique hotel with country-inspired room décor and modern amenities. Or consider the “go-to” hotel of Hollywood stars, the iconic Chateau Marmont Hotel and Bungalows. Set in a 1920s castle-like building on Sunset Strip, you will enjoy the hotel’s refined rooms with balconies that offer panoramic views of glitzy LA.

With its many diverse neighbourhoods, finding a cheap hotel or budget stay in Los Angeles is not too difficult. You have the Mama Shelter LA, which features stylish rooms and an overall ‘just like mama used to make it’ sentiment, on Selma Avenue, in the heart of the lively Hollywood neighbourhood. In Koreatown, near Downtown LA, you can look at The Line, which features industrial chic rooms with floor-to-ceiling windows offering expansive city views. Close to the Warner Bros. Studio, you can stay at The Garland, an urban oasis set on a 7-acre plot, offering Hollywood-themed suites named after the members of legendary actress Beverly Garland’s family. In the beach communities, you can look at the Bayside Hotel on Ocean Avenue in Santa Monica or the modern all-apartment hotel Venice Breeze Suites on Breeze Avenue near the palm-studded Venice Beach. In the posh and expensive Beverly Hills neighbourhood, find the best deals at Hotel Beverly Terrace, a chic boutique hotel with charming rooms set around a beautiful garden-courtyard.

What to do in Los Angeles

Home to the glitz and glamour of all things Hollywood, Los Angeles is a beautiful city blessed with a sunny climate, an unending coastline, several picturesque sandy beaches, and trend-setting, world-class entertainment. The city is vast, and the number of things to see and do makes for quite a long list. Based on the duration of your trip, try to include some of these activities in your itinerary.

How long do people stay in Los Angeles?

On average, people stay in Los Angeles for a total of 4 nights.

How much does a hotel cost in Los Angeles?

$271 per night is the average rate for a room when booking a hotel in Los Angeles. Prices will differ depending on factors such as star rating, time of year and location.

When is the best time to book a hotel in Los Angeles?

Los Angeles hotels are at their most economical to book in the month of January. The rates you are charged may be 31% lower than in the high season, making it the best time to get a great deal.

Which day is cheapest to stay in Los Angeles?

Sunday is the day where you will typically find the lowest price for your hotel room in Los Angeles. The highest price tends to be on Wednesday.

How much does a hostel in Los Angeles cost?

$136 is how much a hostel (and up to 2-star hotels) in Los Angeles could cost you each night. Booking a hostel could save you $135 when compared to the average price of a hotel in Los Angeles.

Based on the weather in Los Angeles, what attractions are popular during July?

Temperatures in Los Angeles are typically around 23 °C during July and the chance of rain is low, which makes July the perfect time to spend some time outside at popular area attractions like Venice Beach, Venice Beach, and Mission Beach.

Learn more about these user-preferred hotels in Los Angeles 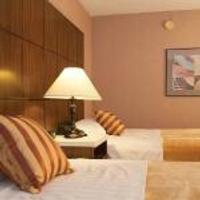 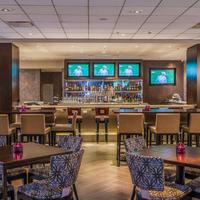 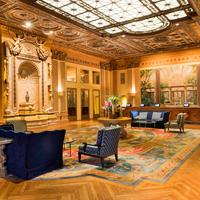 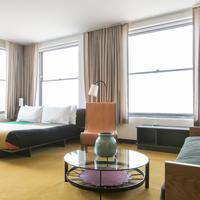 Experience Los Angeles from behind the wheel! Learn more about the best car hire deals

Not set on Los Angeles? Search the best deals on hotels in these destinations