Find the perfect Rome hotel for business or leisure

Things to do in Rome

Are there hotels available near Foro Romano?

Hotels near Foro Romano are typically 2% more expensive than the average hotel in Rome, which is $109.

Are there hotels available near Scalinata di Trinità dei Monti?

Hotels near Scalinata di Trinità dei Monti are typically 19% more expensive than the average hotel in Rome, which is $109.

Are there hotels available near Piazza Navona?

Search for hotels in these Rome neighbourhoods

When to book a hotel in Rome

Let us help you with the best tips about Rome

Explore Rome in the shoulder months of May or September when average temperatures hover around 18 degrees Celsius. In these months, the large tourist crowds that throng the city in the peak summer months are yet to come in, or have already left. Between October – April, average temperatures dip to around 5 – 10 degrees Celsius but almost never fall below 0 degrees Celsius. Hotel rates also drop dramatically during this time, except in the week of Christmas and during the year-end festivities. Pack a warm jacket and enjoy the cool weather along with great deals and discounts. During the peak tourist period from June – August, the weather is hot and humid. This time of the year is so busy, that you may need to book your accommodation a few months in advance to get a hotel of your choice.

With so many of the popular attractions clustered in a compact, pedestrian-only zone, most of the city can be explored on foot. If you plan to visit the Vatican City, you may need to rely on taxis or the metro. The Rome metro (subway), called Metropolitana by the locals, runs approximately every 7-10 minutes and costs €1.50 EUR for a time-integrated ticket of 100-minutes. For €7.00 EUR, you can buy a one-day ticket which allows unlimited travel on all means of transport for 24-hours from first validation. A bus ticket costs the same as the metro, but all above ground transport is affected by traffic congestion, usually leading to delayed journeys. Metered taxis are easily available all over the city. With heavy traffic, scarce parking, and several pedestrian-only zones, it is best if you walk or use the metro instead of driving around Rome.

How much does a hotel in Rome cost per night?

Hostels and cheap hotels in Rome

These hotels and hostels are the cheapest accommodations available in Rome

Get the best value hotel in Rome

Where to stay in Rome

Best places to stay in Rome

The magical ‘City of 7 Hills’, Rome promises to enchant you with its deep history, heritage monuments, world-famous landmarks, delectable cuisine and aromatic cafés. It’s quite possible to become happily lost in the winding streets and piazzas at every turn, when exploring the ‘Eternal City’. If you are visiting for the first time, try to pick your accommodation in the central areas that are home to most of the popular tourist attractions.

The magnificent city centre neighbourhood is home to several tourist attractions, such as Palatine Hill, the Forum Romanum, and the Michelangelo-designed Piazza del Campidoglio. In the heart of Centro Storico, just steps away from the Piazza del Popolo, stay in the plush rooms of Hotel De Russie, the city’s first designer hotel. You can also consider the Hotel Indigo Rome – St. George that offers contemporary rooms decorated with legendary art.

Monti is a hip neighbourhood full of narrow streets packed with bars, eateries and cool boutiques. The Via Nazionale is one of the busiest retail streets in the area and home to several historic attractions. Amid the trendy shops and restaurants in Monti, stay at The Residenze Argileto, a modern guesthouse that offers hotel-like accommodation and features a gorgeous terrace with panoramic views across the city. Enjoy luxurious accommodation at Villa Spalletti Trivelli, an elegant villa-hotel overlooking the Quirinal Palace gardens, offering opulent rooms furnished with antiques and art.

Out of the 7 hills in Rome, Celio is nestled around the Caelian Hill, and is home to the iconic Colosseum. This is primarily a residential neighbourhood lined with fascinating churches, lively restaurants, and the city’s most vibrant gay bars. Enjoy the bright, airy rooms with old school décor and charming balconies in Hotel Lancelot, just a 6-minute walk from the Colosseum. You can also look at the lavish rooms of Hotel Celio, set in a grand 1870s mansion, with wood panelling, Venetian glass and period wallpaper interiors.

With a high density of designer boutiques and high-street shopping, the Spanish Steps neighbourhood encompasses ‘the trident’ of 3 streets – Via del Corso, Via di Ripetta and Via del Babuino. A short walk from the Spanish Steps, stay in style in the luxurious suites of Portrait Roma and experience the exclusivity of this 5-star accommodation. Surrounded by designer fashion shops and historic monuments, consider the Crossing Condotti hotel which offers enchanting rooms with antique furnishings and modern amenities.

This neighbourhood is full of art-filled churches, delightful restaurants, shops and sophisticated bars. The Piazza Navona is a dazzling example of Baroque drama with Bernini’s Fontana dei Quattro Fiumi (Four Rivers fountain) set in the middle of the square. Try the Relais Palazzo Taverna, a boutique hotel set amid the antique shops of Via dei Coronari. The hotel features spacious rooms with bold wallpaper. You can also stay at the classic, antique-filled, traditional Roman hotel, Albergo Del Senato, situated in the Piazza della Rotonda, directly in front of the Pantheon.

Fiori has an old-world charm, and plenty of smart boutiques that attract elderly ladies with sharp bargaining skills. The Piazza Farnese impresses with Rome’s largest Renaissance palace, Palazzo Farnese. These neighbourhoods are also home to artisan workshops and a large ghetto where Rome’s Jewish community still thrives. Stay at the Campo de’ Fiori, an eclectic boutique hotel with opulent, individually decorated rooms set in a Baroque building, just around the corner from the Campo de’ Fiori square. On the cobbled streets of Via Giulia, you have the Hotel Relais Giulia, set in a 16th-century palazzo and featuring stylish rooms with a minimalist décor.

Across the Tiber River, on the right bank, the Trastevere district has 2 halves. West of Viale di Trastevere, you have picturesque alleys, a stunning square, an ancient church, and scores of bars and restaurants. East of the divide is a relatively quiet area with beautiful churches and historic palaces. Enjoy the harmonious balance of vintage Italian and Spanish interiors, and elegant rooms and suites of the Gran Meliá Rome hotel set on the banks of the Tiber river. Or consider the bright and comfortable rooms of Hotel Santa Maria set in a renovated 16th-century cloister within a short walk from popular sites and attractions.

In the heart of Piazza di Spagna, where you have Rome’s fashion triangle and Spanish Steps at your doorstep, you can stay at the Mario De’Fiori 37 hotel set in a charming 17th-century townhouse. Close to the Colosseum and Piazza Venezia, you can look at the stylish rooms of Nerva Boutique Hotel. In the Aventine Hill neighbourhood, consider the family-run Hotel San Anselmo with Art-Deco interiors. The unique rooms here are inspired by epic tales of love and poetry. Amid the shops and restaurants in Monti, you can look at the warm traditional rooms of Hotel Rosetta. Or try the family-run Albergo Nord Nuova Roma hotel set in a historic 1937-built building just a minute’s walk from the Museo Nazionale Romano (National Roman Museum).

What to do in Rome

Rome is a true blend of historic legacies, artistic riches, cultural explorations and al-fresco style romantic feasting. There is so much to see and do in this city, that even a week-long trip may not be sufficient to do full justice to your Rome adventure. Here are some suggestions on what to see and do if you are visiting for the first time.

How long do people stay in Rome?

The average length of stay in Rome is 3 nights.

How much does a hotel cost in Rome?

The price of a hotel in Rome depends on several factors such as star rating, location and demand. Generally speaking, the average cost of a hotel is around $131 per night.

When is the best time to book a hotel in Rome?

Rome hotels are at their most economical to book in the month of February. The rates you are charged may be 38% lower than in the high season, making it the best time to get a great deal.

Which day is cheapest to stay in Rome?

Tuesday is the cheapest day for hotel rooms in Rome. Sunday is the most expensive day.

How much does a hostel in Rome cost?

Hostels in Rome (including hotels rated 2 stars and below) cost $72 per person, per night on average. This is $59 per night cheaper than the average cost of hotels in Rome.

Based on the weather in Rome, what attractions are popular during March?

With an average temperature of 11 °C and expected precipitation of 65 mm, March is a great month to explore the outdoors near Rome.

Learn more about these user-preferred hotels in Rome 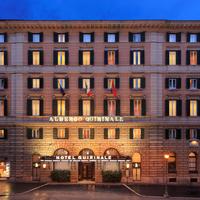 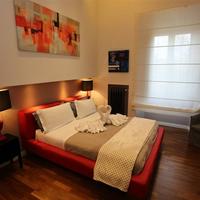 Start planning your trip to Rome

Not set on Rome? Search the best deals on hotels in these destinations